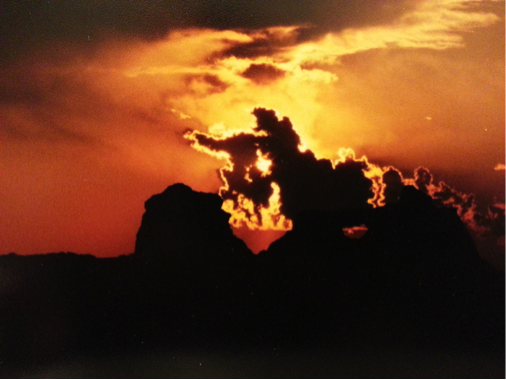 In a few days I’ll be with my family for Thanksgiving. There will be chaos in the kitchen, stuffing-with-gravy overload, and lots of laughter. I will not spend one moment thinking about Pilgrims and Indians; I will not reminisce about school pageants and feathered headbands cut from construction paper. When I found out that the First Thanksgiving story was a lie, I severed it cleanly from any association with this beloved family holiday. Thanksgiving is a time for feeling grateful; thinking about what really happened makes me feel ashamed.

My initial encounter with this shame was at a conference in 1990. I attended a presentation by Choctaw filmmaker Phil Lucas during which he showed his new documentary “Healing the Hurts,” a movie that chronicles a group therapy session for survivors of Indian residential schools. I had no idea what I’d be seeing. People had packed themselves into the room and I stood for the entire session, watching a spot high up on the wall where the film was projected. In the course of that hour, much of what I believed about the basic goodness of humanity was challenged.

I was aware that what I learned in history class about “the Indians” had been whitewashed and couched in euphemistic language. At no time during my schooling was I told the truth about the unfathomable things done to Indigenous people by white people, so I had tried to educate myself. Yet I had still missed a part of the story. When I walked into that screening, I knew nothing about residential schools, nothing about Native kids being kidnapped and dragged screaming from their parents and having wooden blocks strapped into their mouths as punishment for speaking their language. I did not know that children were tortured and teenage girls were sterilized, sometimes without anesthesia. I listened in shock as Phil explained how the residential schools caused much of the current dysfunction in Native American culture and described their residual effect on his own family. An unspeakable thing had happened and I had known nothing about it. It was cultural genocide. It had happened during my lifetime, not so far from where I lived. It had been administered by the church. It had been perpetrated by my kind.

I walked out of the room feeling dazed and numb – and deeply ashamed of being white. The following day, in his keynote speech, Phil spoke of oneness, brother- and sisterhood, forgiveness and love. I heard him and I believed him, but I struggled to understand how his vision could exist alongside what I’d seen in his film – images that would stay with me forever. I struggled to see the place where love and pain intersected, the place where my shame could be transformed into healing.

In 1998 my husband and I shared a long drive through the Black Hills of South Dakota with a Lakota woman who told us stories of her childhood, speaking fondly of her years at the residential school. We expressed surprise that she had such positive memories and when she asked why, we related some of what we’d learned from Phil’s documentary. This seemed to surprise her. She said that she’d had a wonderful time at her school and the nuns had taught her how to sew and cook and speak proper English. Then she asked if she could watch the film. Although we had a copy we were reluctant to show it to her, fearing that it could trigger traumatic memories, but she persisted and eventually convinced us that there was nothing to worry about – she would be fine and was anxious to learn about other people’s experiences.

She was not fine though. She had buried her true memories and watching the movie brought them back. I can’t describe what it was like as she recalled being strapped to a table. I can’t recount how we – my husband and myself, who are not therapists or counselors – how we walked this wounded woman through the trauma of remembering. I can’t, because I’ve repressed my own memory of that afternoon. What I do remember is thinking that it would take a miracle to heal her hurt and my shame.

Just a week later we visited the Pine Ridge Reservation, home of the Oglala Sioux; we were joined by our son Erik, who had worked on a youth service project there a few years earlier. Our hostess sent us into the little town of Kyle to invite folks to a celebration the following week. She gave us a list of people to call on, told us there were no house numbers or street signs, and drew us a map indicating the color and models of cars we would find in the front yards. She also told us not to worry, that people would get word of our presence through the “moccasin telegraph” and would be expecting our visit. We were too ignorant to even realize what we might worry about. After hours of being given the runaround by some and receiving a warm welcome from others, we made our way to the last person on the list. No one answered our knock on the door and we were preparing to leave when a man came around the side of the house and sat on his front porch steps, facing the three of us who stood side-by-side looking down at him.

Nothing I’d heard about poverty and alcoholism on the reservations prepared me for what I  found at Pine Ridge. It was so unlike my middle-class white suburban experience that I could only move from one moment to the next, taking things in without any way of assessing their meaning. Without Phil Lucas’s film, I would have had no frame of reference at all, no awareness of how this situation had come about. But because I had watched it, I did know. And I felt somehow complicit.

We handed the man our invitation and said we hoped he would come to the celebration. And then  he began to tell us his story. It was difficult to follow because he was very drunk and spoke little English, but we understood that he felt ashamed of his condition. At one point my son sat down on the step next to him; maybe he put his arm around the man’s shoulders, I don’t remember for sure. The man asked for prayers. One of us pulled out a prayer book and Erik read quietly and tears streamed from the man’s eyes and my husband and I stood still. The prayer was finished. The man pointed to the prayer book and said, “Go!” and my son began reading again and the man’s tears kept falling. And then again, “Go!” and another prayer. When his soul was finally satisfied, my son embraced him, pressing his young face against the man’s worn cheek. And this is another image that will never fade from my memory: the piercing look in that man’s eyes – the untarnished nobility cutting through all the oppression – and his tears now transferred to my son’s face.

I realize now, as I share this story publicly for the first time, that a cement porch on a rundown house in a poverty-stricken town on the Pine Ridge Reservation is that place I couldn’t envision so many years ago. It is what Phil Lucas could see – the place where love and pain intersected, where hurts could be acknowledged and their weight shared, where shame could be remembered and then released.  Now that I know this, I will not forget; I will return there when I’ve lost sight of my goal. And as I celebrate this Thanksgiving with my family, I will honor that place and know that this is a time for feeling grateful.

To see excerpts from “Healing the Hurts” go to:

For more information on residential schools, see this article in Amnesty International Magazine: