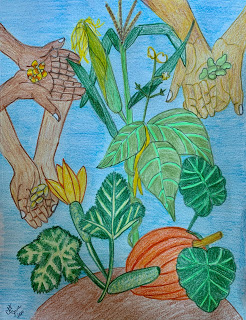 “Just a reminder: the system in what is currently known as the US isn’t ‘broken.’ It was designed by male white supremacist slaveowners on stolen Indigenous land to protect their interests. It’s working as it was designed.” –Dr. Adrienne Keene (Cherokee)

Too often the framing of racial justice gets limited to the Black/white experience. We find that by broadening our lens of how white supremacy marginalizes multiple groups, we both deepen our understanding of white supremacist strategy and impacts and learn about particular histories and current issues of historically targeted groups. Indigenous people, the first to feel the wrath of white supremacy on what we now call US soil, sets the stage for the human and environmental destruction that has unfolded since. As you work through this challenge, bear in mind the degree of invisibility experienced in US Native communities. Not only did European colonial settlers rob Indigenous people of their land, their culture, and their lives, they erased their 20,000+ year old history through omission and myths. The process of reclaiming Indigenous history is a work in progress and therefore not always complete or aligned. Not to worry. Take in what you can in the spirit it is offered – from perspectives and experiences as diverse as the millions of descendants from the 574 nations on whose land we in the US now stand.

Thank you for choosing and using this challenge. If you want to stay connected, email 21daychallenge@theprivilegeinstitute.com. We'd love to know how it went for you and your group!

Choose one activity per day

Each day, for 21 days, pick at least one of the below resources or activities to do.

Encounter new writers and ideas from a range of media sources.

Listen in on the kinds of open, honest conversations that too many of us avoid having.

Watch and learn. We’ve offered everything from short videos to full-length films.

Why didn’t I see this sooner? It’s easy to overlook what we’re not looking for.

Engage with Indigenous peoples and cultures. Be a learner more than a knower.

Reflect on what you choose to do, what you’re learning, and how you are feeling.

Create Let the music move you!

* For adaptation ideas and examples of how communities are adapting the challenge to meet their specific social justice focus, click HERE.

All My Relations, hosted by Matika Wilbur (Swinomish and Tulalip) and Adrienne Keene (Cherokee Nation) this podcast “explores indigeneity in all its complexity.” Episodes focus on issues such as DNA identity, appropriation, feminism, food sovereignty, gender, sexuality, and more while “keeping it real, playing games, laughing a lot, and even crying sometimes.” (1 hour episodes)

Uprooted: 1950s plan to erase Indian Country Podcast about the genocidal Indian relocation and termination policies of the US government in the 1950s and 60s. At the time, “blackness” was defined by the “one-drop rule,” but “Indianness” could be washed away in just a few generations through intermarriage with whites. More black Americans meant more workers to exploit. Fewer Native Americans meant more land to take. (50 minutes)

Unreserved Podcast host Rosanna Deerchild (O-Pipon-Na-Piwin Cree) takes you straight into Indigenous Canada, from Halifax to Haida Gwaii, from Shamattawa to Ottawa, introducing listeners to the storytellers, culture makers and community shakers from across the country. The Unreserved team offers real talk from the people behind the headlines, with a soundtrack from the best in Indigenous music. (40-55 minute episodes)

Teaching While White: Recovering the Voice of Native Americans in the Classroom Jenna Chandler-Ward interviews Native American educator Claudia Fox Tree (Arawak) about the ways we learn about Indigenous Peoples in school- or don’t. (30 minutes)

The Missing And Murdered Indigenous Women From Across The U.S. NPR’s Sacha Pfeiffer speaks with Annita Lucchesi (Cheyenne) about her report looking at missing and murdered indigenous women and girls in 71 cities across the U.S. (4 minutes)

Listening to Indigenous Voices Join the Jilted Indians as we discuss the importance of listening to indigenous voices and building a shared memory of the history of this country on a special Indigenous People’s Day episode. (1 hour)

The Hidden History of Indian Slavery in America – Exposes the history of the enslavement of 2.5-5 million native peoples in the Americas, beginning the moment Christopher Columbus arrived. (40 minutes)

‘We the People’ – the three most misunderstood words in US history – TED Talk by Mark Charles ( Navajo) man explains the history of the Papal Bulls of the 15th Century which are embedded in our founding documents in the 18th Century, codified as legal precedent in the 19th Century and referenced by the Supreme Court in the 20th and 21st Centuries, the Doctrine of Discovery has been used throughout the history of the United States to keep “We the People” from including all the people. (17 minutes)

Creating A More Equitable Society Is In White Americans’ Self Interest – Dr. Ibram X. Kendi joins Stephen Colbert to discuss what it takes to call one’s self antiracist, and how he believes it’s in everyone’s interest to end the racist policies that cause inequality in this country (12 minutes)

Mount Rushmore – Adam Ruins Everything explains how the sacred Black Hills were stolen and carved upon without Lakota permission. (5 minutes)

Christopher Columbus Was a Murderous Moron – Adam Ruins Everything explains where this holiday comes from and why changing it to Indigenous Peoples Day is so important. (6 minutes)

Columbus Was a Genocidal Rapist – Franchesca Ramsey explains who Christopher Columbus was, why it makes no sense to celebrate him, and how Indigenous People’s Day is taking hold across the country. (3 minutes)

Reconsider Columbus Day – A PSA-style video featuring multiple voices urging us all to abolish the holiday and use the day to learn Indigenous history. (2 minutes)

Everything You Know About Thanksgiving is WRONG – Franchesca Ramsey shares some real history about the myth-filled US holiday called Thanksgiving. (4 minutes)

Hear the Untold Story of a Canadian Code Talker from WWII – The story of Canadian code talker Charles “Checker” Tomkins (Metis) and how the top-secret cree-language mission he helped lead contributed to the winning of of WWII. (14 minutes)

The Iroquois Influence on the Constitution – Host and producer of First Voices Indigenous Radio’s Tiokasin Ghosthorse explains how US founding fathers used what they learned from Iroquois law in the US Constitution. (4 minutes)

Revitalizing the Wolastoquey Language – Members of the Wolastoquey Nation share their experiences around speaking and reclaiming their language in an effort to maintain and pass along culture. They ask the question: Can you be a nation without language? (14 minutes)

A Conversation With Native Americans on Race – Indigenous people from a range of backgrounds grapple with the racist contradictions of a country that, many feel, would prefer it if Native Americans didn’t exist. (6 minutes)

“The Police Killings No One Is Talking About”: Native Americans Most Likely to be Killed by Cops – News report revealing Native Americans are more likely to be killed by police than any other group, including African Americans. It also finds that cases of African-American police deaths tend to dominate headlines, while killings of Native people go almost entirely unreported by mainstream U.S. media. (15 minutes – start at minute 44)

Higher education and the legacy of land theft – After a two year investigation by High Country News, the story Land Grab Universities was published at the end of March of this year. It shows how the U.S. Government took away lands from Tribal Nations and helped states created endowments for these universities. Those endowments and the money trail remain on the books today. (27 minutes)

Vine Deloria Jr. on Our Relationship to the Unseen – Thoughtful exploration of the contrast between Indigenous relationship to life, nature, and intuition and western culture’s materialism orientation. (5 minutes)

In The White Man’s Image – PBS documentary about the Native American boarding school movement designed to “kill the Indian and save the man.” (56 minutes)

Check out the Native Land App on your browser (also can download on phone, tablet).

As you move about around your town/region, look for signs of Indigenous people.

Notice what sports you have played or watched.

If there is a major holiday or observance, what is the Indigenous perspective?

Follow Indigenous activists, educators, and organizations on social media. Here are some ideas to get you started. A good way to widen your circle of who you follow is to check out who these organizations follow, quote, repost, and retweet. 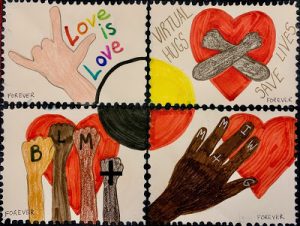 Here are some things to keep in mind when engaging with Indigenous peoples and cultures.

Be aware of cultural appropriation.

Which books are appropriate?

Practice “reciprocity” with the natural environment.

Use our tracking tool to stay on track and be able to reflect back at the end.


Tip: diversify your habits by doing some of each.

Let the music move you!

Cradle Song and Colors of My Heart by Sharon Burch (Navajo)

Who Will Speak by Crystal Woman (Cherokee)

Stand Up is about DAPL

Come and Get Your Love by Red Bone (various nations)

Up Where We Belong by Buffy Sainte-Marie (Cree)

Songs not by Indigenous People, but related and supportive

HERE is a good, simple song for Columbus Day