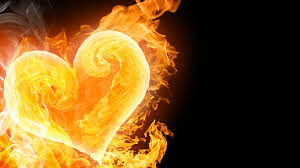 Poem: Where I Am From

I am from lakesides and campfires and cool starry nights - From laughter and togetherness, competing and rollicking - I am from Scotch Bridge and tennis and horses and diving - From canoeing and skiing and skating and Clue - I am from frostbitten fingers and cards by the fire - From sunscreen and sea salt and steep mountain hikes - I am from stolen land profits and denial as an art

Last June, when I learned through my publicist that Audiobooks had inquired about obtaining the international audiobooks rights for Waking Up White, I braced myself to share with them one non-negotiable: I wanted to self narrate. After all, it’s such a personal story. I couldn’t imagine anyone else’s voice revealing my personal humiliations and awakenings. To my delight, in Audiobooks’ first correspondence, they had one hope in particular: That I would narrate my own story. Thus began a beautiful partnership.

When I learned that Audiobooks would be shipping me the technology...read full piece here.

We’ve come a long way from Negro History Week to Black History Month and yet too often the celebrations that are planned in predominantly white spaces are nothing short of lackluster, rarely bringing a modern-day context to the celebration or acknowledgement that Black history is a continually evolving living history in which we all play a role.

Part of the problem is that for non-Black people, too often there is a sense of being a passive celebrator. Yet, in this current climate there is immense opportunity. We can make real racial change by...read full article here. 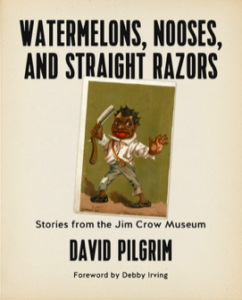 Forward to Watermelons, Nooses, Straight Razors and Other Stories from the Jim Crow Museum

In 1983 I graduated from college with a history degree. My desire to study the past sprung from my belief that it held critical lessons for the future. The department teemed with passionate professors. The library shelves groaned with research books and periodicals. The curriculum offered more than I could squeeze into my course load. At the time, I would have told you the department lacked nothing. And yet in 2016, I am appalled by the limitations of the education I received.

This is not to point fingers at my college, which like most colleges and universities in the United States, takes its cues from a broader U.S. culture rife with an intentional and unintentional denial that allows for one-sided history telling and vigorous myth making. Though I learned about Christopher Columbus and the European context around his pursuits for instance, I did not learn...read full forward here. 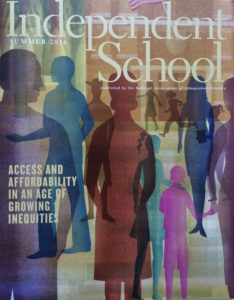 Imagine your school’s graduation day some years from now. You look around at your community abuzz with the joys of watching a new generation of students launched. You know they are ready. Each and every scholar has made her mark on the school. Each has grown into a confident, expressive version of that younger person who showed up in the admissions office just years earlier. The school has become...read more in Summer 2016 Independent School Magazine 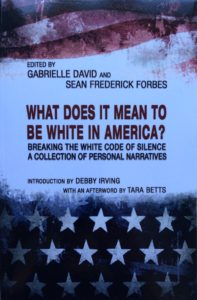 Introduction to What Does It Mean to Be White In America?

In 2009, when I began telling white friends, family, and perfect strangers that I planned to deepen my understanding of racism, and shared with them the questions that filled my mind, something remarkable happened. Far from the silence and shunning I anticipated, most leaned closer, lowered their voices, and said something like, “Me too. I’ve wondered that too.” Often the comment would be followed by a story of an unresolved upset or confusion. Everyone, it seemed, had a story. Most also had questions.
I am especially grateful for the way this collection reveals a range of white experiences and cultural differences; each essay adding nuance to what it means to be white in the United States of America. While the use of the n-word is commonplace in some white worlds, many others teach racism less directly by speaking in code about the “inner city,” automatically locking car doors in “those” neighborhoods, and being taught to “stick to your own kind.” I learned that the Connecticut town my own husband grew up in let...read full introduction here.

I recently attended a fundraiser for an organization designed to “serve inner city youth.” Wine flowed, four courses of spectacularly prepped and plated food fed us, and a handful of young people spoke about the organization’s positive impact on their lives. The hope, of course, was that by wining, dining, and inspiring the heavily resourced crowd, increased support would stream to the organization and more young people could be served.
Once upon a time I might have been the person to organize such an event. Like many Americans, I was socialized to think in terms of individuals, not systems. People in distress created an impulse to help, never a drive to examine or challenge the forces creating the distress. Supporting YW’s, homeless shelters, needle exchange programs, and community gardens offered me the opportunity to feel like I was making a difference. And to some extent I was. What was missing for me was...read more of my guest blog on the Food Solutions New England website.